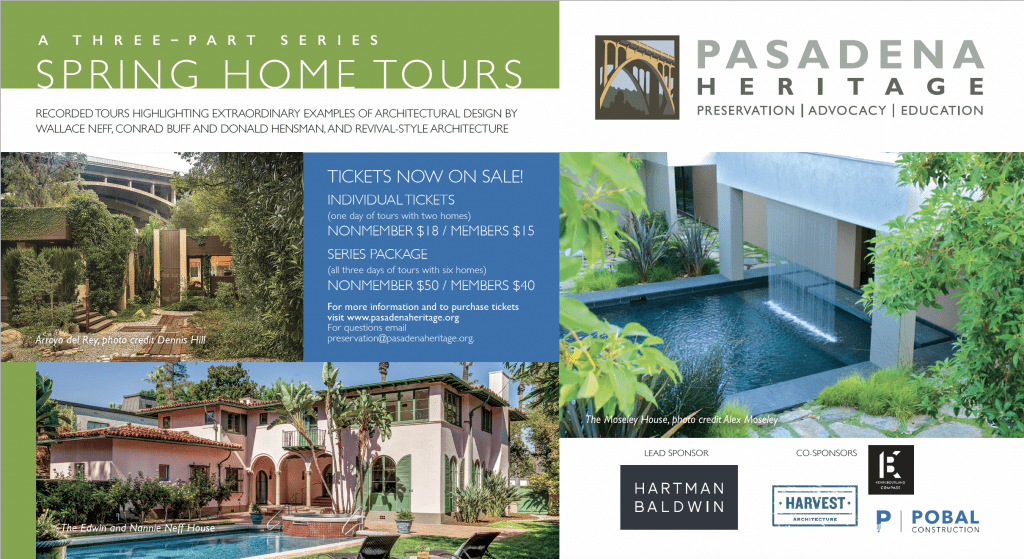 Pasadena Heritage is proud to present a new version of our annual Spring Home Tour. Instead of a one-day event, tours of six architectural works of art will be offered as a series. Recordings of two different home tours will premiere on the last Sundays of April, May and June. Recordings will be available through July 4.

In May we will explore Arroyo del Rey, the 1979 custom-designed Modern home nestled under the freeway bridge and taking full advantage of its site, designed by Buff & Hensman. The second featured home is the spectacular Moseley House, designed in 1999 by Don Hensman. The tour will include interviews with the homeowners who will give first-hand accounts of working with Conrad Buff and Don Hensman.

In June we will visit the charming Lansing Beach House, a French Norman-style home built in 1927 by David Witmer and Loyall Watson. The original owners of this house, Lansing and Katherine Beach, met in France during WWI. It is said that they had this home built in this style as a tribute to their courtship. A second house, yet to be determined, will also be featured in June.

Links to the pre-recorded video will be sent the day of each premiere and will be available until July 4.